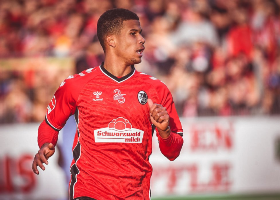 English Premier League club Norwich City are exploring ways to sign former Nigeria U23 invitee Chima Okoroji.
According to our colleagues at Transfermarkt.de, SC Freiburg loanee Okoroji has been scouted by Norwich City and Bayer Leverkusen in recent matches with a view to a transfer.
The rumours linking the defender with a transfer to the Premier League add up as the Canaries are coached by German Daniel Farke.
Okoroji is spending the entirety of the 2019-2020 season on loan at German 2 Bundesliga team Jahn Regensburg and has caught the eye since his loan move to the Jahn Eleven, having a hand in 3 goals in 12 league appearances.
The 22-year-old counts TSV Grünwald, Bayern Munich and FC Augsburg as his former clubs.
In 2014, he was called up by the Nigeria Football Federation to attend a Dream Team VI training camp but did not show up in Abuja.
Predominantly a left-back, Okoroji has a contract with SC Freiburg until the end of the 2020-2021 season.
Igho Kingsley
Photo Credit : scfreiburg.com