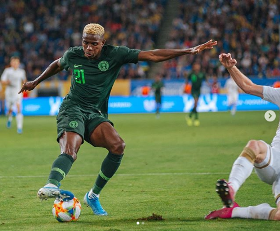 Lille striker Victor Osimhen has pointed to the barrage of criticisms that he received whilst at German Bundesliga side Wolfsburg that has motivated him to improve in his game.
The in-form Nigerian has scored seven Ligue 1 goals and two more in the UEFA Champions League this season and is expected to play a pivotal role in Nigeria's 2021 Africa Cup of Nations qualifiers against Benin Republic and Lesotho.

Osimhen spke to SuperSport via Skpe on Saturday as monitored by allnigeriasoccer.com

"I will say it's the grace of God has been the secret to my form for Lille and all I went through at Wolfsburg has motivated me and inspired me to all I have achieved and I want to keep to the momentum.

"As a striker you have to take your chances. I'm a very positive person and I go into games hoping to score in any situation I find myself. I look forward to at least three opportunities and slot them in.

Osimhen is set to miss the November 22 clash against Paris Saint Germain and he explains why he will not play the Paris billionaires who are atop the league table.

On being the Super Eagles first choice striker following the retirement of Odion Ighalo, Osimhen reveals how the former Watford striker has encouraged him.

"I say a very big thank to you to Odion Ighalo. I never knew he was going to retire.  He gave me some useful tips on how to improve my game while we were at the Africa Cup of Nations," Osimhen told Supersport.

"And also I have been working with the coach and he knows the kind of qualities that I possess and he feels that I will fit into his philosophy of the game.

"The coach has the luxury of also picking Paul Onuachu and Peter Olayinka so if I'm not there these guys will carry on with the job. In all, I want to carry on doing well for my club and the national team.

"The game against Benin and Lesotho, the boys are ready. You can see that everybody is in top form. And our captain Ahmed Musa is back from an injury so we're going to give our all and go for the three points.

The Super Eagles camp will open on Monday ahead of the games against Benin and Lesotho in Uyo on the 14th at the Akwa Ibom International Stadium Uyo and the away game to Lesotho.