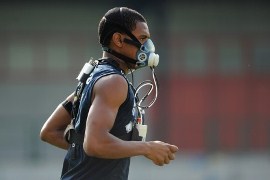 Super Eagles midfielder Nwankwo Obiora missed out on a chance to show off to a the plethora of European scouts that thronged the Estádio do Bessa Século on Sunday.

According to Portuguese news outlet Record, scouts representing English clubs namely Manchester United, Watford and Southampton were in attendance and watched on as Porto beat Boavista 1-0.

Boavista's Nwankwo has made eight league appearances of the eleven his team has played this season in the Primeira Liga but was a non-playing substitute for The Panthers yesterday.

Talent spotters from Portuguese sides Marítimo and Famalicão were also present to run the rule over the players in action, as also was Alavés (Spain), Genoa (Italy) and Marseille (France).

The 2013 AFCON winner joined Boavista from Greek club Levadiakos in 2017 and counts Inter Milan, Parma, Cordoba, Gubbio amongst others on his curriculum vitae.