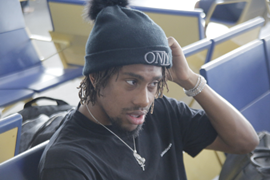 The Super Eagles camp in Uyo came alive on Monday afternoon with the arrival of not less than nine of the team's stars who will be available for their first training session ahead of Wednesday's 2021 Africa Cup of Nations qualifier against Benin.
The team's skipper Ahmed Musa was joined by England-based trio of Alex Iwobi, Wilfred Ndidi and Semi Ajayi at the Le Meridien hotel in Uyo as the number of players available for manager Gernot Rohr to kick start work with continue to burgeon.

The latest contingent thus, brings the number of the players already in camp to twelve with the trio of Samuel Kalu, Kenneth Omeruo and Ikechukwu Ezenwa the early birds on Monday morning.

Eleven players are still being expected in Uyo as at 1430 hours.

Nigeria will hold one training session this evening when Rohr will access the physical conditions of the players who are available.