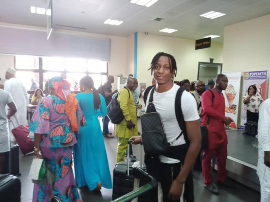 Glasgow Rangers star Joe Aribo is set to become cap-tied to Nigeria for the rest of his career after reporting for international duty in Uyo ahead of Africa Cup of Nations qualifying matches against Benin and Lesotho, allnigeriasoccer.com can exclusively report.
Aribo has played two nonbinding games for the three-time African champions, against Ukraine and Brazil and enhanced his reputation by scoring in both games.
The London-born midfielder arrived the Akwa Ibom State capital on an Ibom Air flight at approximately 1045 hours on Tuesday morning.
Abdullahi Shehu, Mikel Agu, William Troost-Ekong, Samuel Chukwueze, Moses Simon and Paul Onuachu also disembarked from the flights that came in from the Murtala Muhammed International Airport, Lagos and Nnamdi Azikiwe International Airport, Abuja.
After airport formalities, the seven players boarded cars to head to the Ibom Hotel & Golf Resort, where the Super Eagles will be staying until they leave for Lesotho.
The aforementioned players are all expected to take part in the Super Eagles final workout later today before Wednesday's clash with Benin.
Ifeanyi Emmanuel