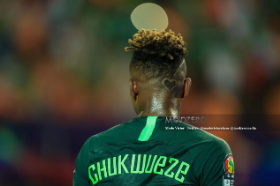 Preparations are in full gear for Nigeria's 2021 Africa Cup of Nations qualifiers Group L opener against Benin slated to be held at the Godswill Akpabio International Stadium tomorrow.

Allnigeriasoccer.com brings readers the top three Super Eagles players sure to be in the limelight against the Squirrels,


Samuel Chukwueze: Chukwueze is expected to start as one of the wingers when Nigeria take to the field on Wednesday.
The Villarreal star dazzled against Brazil in the last international weekend before now, and with three points and a competitive victory up for grabs here, he will bring much more to the table.
He has scored two goals and provided two assists for his La Liga club in twelve appearances this season.

Victor Osimhen: Osimhen will lead the lines tomorrow and we trust that fans are already longing to see more of his burst and clinical self.

The prolific Lille striker will be aiming to add to his first senior goal which he got in the draw with Ukraine.

Joe Aribo: The Glasgow Rangers star will undoubtedly play his cap-tying game for Nigeria on Wednesday, as he is expected to line up as one of the midfielders Gernot Rohr will deploy.

Aribo has shown his willingness and hunger to connect with teammates and get in the danger zones during his short time with the team, and you can bank on him to put up another five-star display on Wednesday.