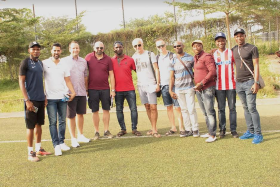 The three-day scouting tournament which is mainly designed for footballers under the age of 19 witnessed a massive turnout between November 9 and 11 at the FIFA Goal Project, Abuja.

Twenty academies across Nigeria from Plateau, Abia, Anambra, Delta, Kaduna and Rivers States as well as the host city, the Federal Capital Territory threw their boys at the challenge and the players  gave a good account of themselves

The presence of football agents from Portugal, Czech Republic, Slovania and Croatia was also witnessed, the chief scout of Malmo FF from Sweden as well as his Estoril counterpart were present all through.

President of Right2Win Academy Engineer Kelechi Nnorom Orji appreciated everyone who contributed to the success of the event and confirmed that sustainability has been imbibed into the Tournament.

He said : "I give kudos to everyone who contributed to the success of the event including those who worked behind the scene,   I came up with this idea In order to give opportunities to the talents we have in the country particularly for them to have a knowledge of what playing alongside the Europeans looks like".

"They must have learnt one or two things which will prepare them for the future when they eventually get to sign professional deals abroad".


Also speaking Mr. Eddie Iseri Ogbemudia of Myron Topclass Sport Outfits one of the partners of the tournament commended Engr. Kelechi Nnorom for pulling this through successfully.
"I know many people that have invested so much and couldn't achieve what I witnessed at the FIFA Goal Project Pitch, during the 3days the tournament lasted," he said.
"Special thanks to all the participating players clubs/academies, it was a memorable event."