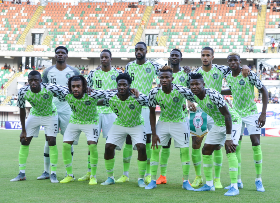 Several European clubs monitored proceedings from the Godswill Akpabio Stadium on Wednesday evening and noted the influence of their Nigerian players in action.
The Super Eagles kick started their 2021 AFCON qualification series with a 2-1 victory over Benin courtesy of goals from Victor Osimhen and Samuel Kalu; their first win since the conclusion of the 2019 Africa Cup of Nations having played back-to-back draws with Ukraine and Brazil.

Below are some of the reactions of their European clubs about the part their players played in the victory.


Bordeaux re-tweeted the Super Eagles notification on Samuel Kalu's goal and posted an emoji in solidarity of the strike which completed the comeback in Uyo.
Leicester City lauded their midfielder Wilfred Ndidi on their website and noted that he was in action for the entire ninety of the game alongside a tweet which read,


"A winning start to AFCON 2021 qualifying for Wilf! 🇳"
Everton wrote on their official website : ''Alex Iwobi played the full match as Nigeria came from behind to get their Africa Cup of Nations qualifying campaign off to a winning start with a 2-1 victory at home to Benin.

''Blues forward Iwobi started the Group L opener in Uyo as the Super Eagles look to reach the 2021 finals in Cameroon, having finished third at this summer's tournament hosted by Egypt.''
Victor Osimhen's club Lille noted the striker's contribution to the win with a tweet thus,


Villarreal also noted with a tweet that their star Samuel Chukwueze was on from start to finish for the Super Eagles yesterday.
SC Paderborn also joined in on the act and noted that their defender Jamilu Collins celebrated victory with the Super Eagles from the encounter in their tweet.
Nigeria will meet Lesotho at the Sesotho Stadium in Maseru on Sunday in their second group game.
Emmanuel Chinaza