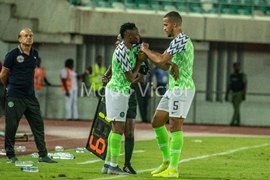 Ahmed Musa has revealed that he fears for some Super Eagles players ahead of their trip to Lesotho for a 2021 Africa Cup of Nations qualifying match because the game will be played on a synthetic surface.
The former Leicester City striker, a late substitute in yesterday's win vs Benin, is targeting another three points in Sunday's clash against the Crocodiles.
Asked at Wednesday's post-match presser what he expects from the Super Eagles against Lesotho, Musa answered : ''As you can see, it was a tough game for the team today but at the end of ninety minutes we have three points so we are going over there to have another win because we know that the game is going to be very tough.

''We are going to play on an artificial pitch, it is not that easy because some of the players are not used to playing on synthetic pitch.
''But we know what everybody expects from us so we are going there to do our best to win.''
Ranked 138th in the latest FIFA ranking, Lesotho registered an impressive 1-1 draw against hosts Sierra Leone (117th) in their Africa Cup of Nations qualifiers Group L opener in Freetown.
Igho Kingsley