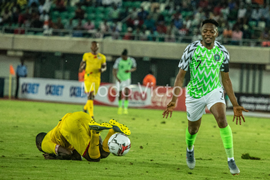 Former Super Eagles captains Joseph Yobo and John Obi Mikel ended their careers with the national team as 'non-playing captains' as other players were ahead of the duo in the pecking order.
Now named substantive captain following the retirement of Mikel in July, Musa started his reign among the substitutes in yesterday's clash against Benin, before he was introduced in the closing minutes.
The former Leicester City striker has insisted that he's not bothered being on the bench, adding that he even advised Rohr to start the same players that started in the impressive 1-1 draw with Brazil last month.
''Like I said yesterday, I told everyone, for me I don't have to play. If the coach wants me to play I can play,'' Musa told reporters, including allnigeriasoccer.com.

''He can start the team against Brazil because they played very well. As you can see the young players are coming up, you have to give them a lot of chances.

''Soon maybe Ahmed Musa is not going to be here anymore, we have to start grooming some top players.''
Super Eagles manager Gernot Rohr has praised Musa and revealed the advice given to him by the number 7 a day before the match against Benin.
The German said : ''Let me add something. It is wonderful to have a captain like that, he advised me in the press conference yesterday to start with the same team.
''We started with the same attack like in Ukraine which was good. He is coming back from injury, other players are playing more than him, and he told me to play the other people, it is wonderful to have a captain like that''.
Igho Kingsley