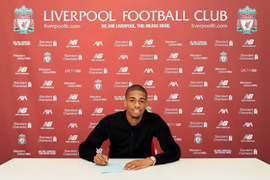 Former Arsenal starlet Elijah Dixon-Bonner has inked a new contract with Liverpool, the Reds informed via their official website on Monday.
Aged 18, Dixon-Bonner joined Liverpool in 2015 and was previously on the books of the Gunners since U9 level.
He was a key member of the Liverpool side that won the FA Youth Cup last season and went the distance against Manchester City in the final of the prestigious competition.
Dixon-Bonner signed his first professional contract with Liverpool in February 2018, a month after celebrating his seventeenth birthday.
A former England U16 captain, he also has caps for the Young Lions at U17 level and featured for the country at the 2018 European U17 Championship.
This season, the creative midfielder has appeared for the Reds in the UEFA Youth League, Premier League 2 and EFL Trophy.
Igho Kingsley
Photo Credit : liverpoolfc.com