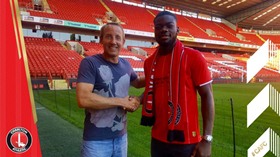 Charlton Athletic defender Deji Oshilaja has revealed that Chelsea Women midfielder Drew Spence was the toughest player he played with during his teething years as a footballer.

Oshilaja had a difficult background growing up, as he was playing mixed street football in South London before he was snapped up by Cardiff City as a 16-year-old.

In an interview with Football London's Alan Smith, the 26-year-old made this known after explaining his tough upbringing thus,

"Growing up in south-east London, inner-city London, is tough. You have to be tough. I grew up on the Old Kent Road and there was a lot of gang violence there but football was the way out for me and it definitely kept me away from that, kept me on the straight and narrow.

Though he admitted having to face bulky Adebayo Akinfenwa who is regarded as the game's strongest player week in week out during his time with Wimbledon in League One was not an easy feat, it might not come as a surprise with the talented Spence who is a two-time Women Super League winner with the Blues as well as a having two FA Women's Cup medals to her name.

Oshilaja is a well known figure in the English Football League having also been on the books of Newport County as well as Sheffield Wednesday.

This season, the central defender who is eligible to play for the Super Eagles has earned seven appearances in all competitions for Charlton.