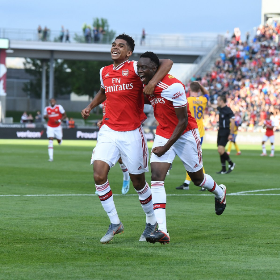 On Tuesday, Arsenal continued preparations for their next Premier League match against Southampton, allnigeriasoccer.com reports.
Spanish football tactician Unai Emery continues to run the rule over young Nigerian midfielder James Olayinka ahead of a potential debut.
The 19-year-old has been training with the first team since the third international break of the 2019-2020 season and was among the players that attended the session at London Colney in St Albans on November 19.
Olayinka was pictured battling for the ball with Arsenal first team stars Hector Bellerin and David Luiz.
With the Gunners already out of the League Cup, the central midfielder stands a chance of making his professional debut in the Europa League as Emery team's can qualify for the round of 32 with a game to spare if they beat
Eintracht Frankfurt on November 28.
Olayinka showed he knows how to find the back in pre-season, scoring for the first team against Colorado Rapids, and was on target for the U21s against Northampton Town in an EFL Trophy clash in August.
Ifeanyi Emmanuel
Photo Credit : arsenal.com