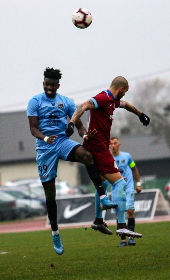 At least three French Ligue 1 clubs are keeping a close watch on promising Nigerian striker Tolu Arokodare with a view to a transfer, according to reports.
French transfer market website Foot Mercato claims the Ligue 1 is delighted by Victor Osimhen's season with Lille and the Super Eagle has made other French clubs sit up and take notice of other exciting Nigerian talents.
Considered one of the best 18-year-olds in his homeland, Arokodare is on the radar of Toulouse, Angers and Amiens.
He previously trained at Freiburg in Germany and Toulouse but could not be signed by the two teams because of administrative problems.
Apart from the interest from Ligue 1 and Bundesliga teams, Major League Soccer clubs are keeping tabs on the highly-rated teenager.
Arokodare arrived at Latvian Virsliga side Valmiera in July 2019 and took the league by storm, scoring 6 goals in his last eight games.
The former Box-to-Box Football Academy, Lagos frontman was a member of the Golden Eaglets squad that failed to qualify for the 2017 FIFA U17 World Cup.
Igho Kingsley