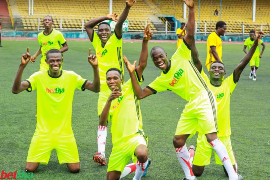 The four semifinalists in the 2019 Bet9ja Royal Cup have emerged following the completion of the quarterfinal action on Wednesday, November 21 in Warri.

The semifinalists are Rolly FC of Koko, Bobbies United of Warri, Lord Honour FC of Warri, and Osevan FC of Kwale.

From the pairings, it is mathematically certain that a Warri-based team will play in December 14 final, as Bobbies United will go up against elite conquerors, Lord Honour FC, in the first semifinal tie.

Osevan FC will hope to deplore all ammunitions in their arsenal to gun down the smooth shelling Rolly FC in the second semifinal game.

On Wednesday, Osevan FC effortlessly defeated Young Shall Grow FC 3 - 0 to keep the final and the One Million Naira prize money in close sight, just as Lord Honour FC emphatically thumped Ekete United 4 - 0 to register their solid presence in the title race.

The semifinal encounters will take place on November 29 at the Warri City Stadium, with the first fixture at 10am and the second clash at 12noon.

The grand finale of the 2019 edition of the Bet9ja Royal Cup will take on December 14 at the Stephen Keshi Stadium in Asaba.