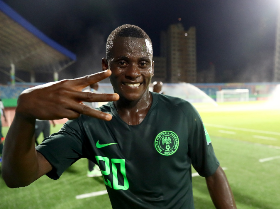 Allnigeriasoccer.com has been informed that two English Premier League clubs have joined the scramble to sign Nigeria U17 sensation Ibrahim Said.
The Dabo Babes Academy attacking midfielder was one of the stars for the Golden Eaglets at the recently concluded FIFA U17 World Cup and his performance during the competition in Brazil has attracted the attention of several English teams.
Chelsea and Leicester City are the latest clubs to have made enquiries over signing Ibrahim Said but face competition from Premier League rivals Liverpool, Manchester City and West Ham.
The 16-year-old has drawn comparisons with Chelsea star Victor Moses due to his playing style and ability to play in several positions.
Dutch and Belgian clubs have shown an interest in signing Said but he has been advised to join a team with Nigerian players in their ranks so he can quickly settle in his new environment.
Leicester City pay the wages of Super Eagles stars Kelechi Iheanacho, Wilfred Ndidi, and Nigeria-eligible players such as Calvin Ughelumba, Josh Eppiah,Chituru Odunze, Layton Ndukwu and Daniel Obi, while the likes of Faustino Anjorin, Jordan Aina, Prince Adegoke and Kelechi Chibueze are on the books of Chelsea..
Said's second goal against Ecuador at the FIFA U17 World Cup was nominated for the FIFA U17 World Cup Brazil 2019 Goal of the Tournament, an award eventually won by Mexico's Santiago Munoz.
Ifeanyi Emmanuel
Photo Credit : fifa.com