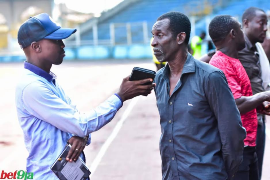 Ex-Nigeria international and Technical Adviser of Rolly FC of Koko, Ndubisi Okosieme, has urged stakeholders to pay more attention to grassroots football development in the country.

On his side's 3 - 2 victory over Osevan FC, the tactician noted the game against Kwale-based club was very tough.

He added that his boys were too relaxed at some point in the encounter, feeling that they would win in the long run.

"The game against Osevan was a very tough one," said Okosieme.

"My boys were too relaxed, because they feel we would win them."

"I told them it's not over until it's over. Overall, we played in a such way that we got to the final. We're in the final now and we are happy."

Speaking on the prospect of facing either Bobbies United or Lord Honour in the final, after the first semifinal tie could not hold as planned, Okosieme said Rolly FC are prepared to meet any of them in the December 14 grand finale in Asaba.

"We're ready to take on any of them," Okosieme stated.

"We don't have any favorite team we want to meet in the final."

The semifinal tie was very entertaining, with both teams treating the fans at the Warri City Stadium to good transitional and attacking brand of football from end to end.

Osevan FC opened scoring mid way in the first half through Chukwuma Ofili, before Rolly FC had their perfect response few minutes before halftime through Obinna Michael to tie the game at a 1 - 1 scoreline.

On resumption of the second period, Osevan FC went ahead again almost immediately through an Echun Ifeanyi's fine effort on goal in the 47th minute.

The 2 - 1 advantage did not count for long, as Hassan Lasisi whipped in the equaliser against run of play in the 52nd minute.

Rolly FC were not done after that. In the 56th minute, Koko side had a freekick close to the box, with Osaghae Solomon sumptuously delivering the resultant set piece beyond the reach of the goalkeeper, Melvin Ubah, who was rooted to the ground.

That won the game for Rolly FC 3 - 2, as Osevan FC will wait a little bit long to know who they will meet in the losers' final.

Rolly FC are still unbeaten and have only conceded just three goals since the start of the group phase.