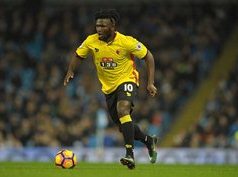 A round-up of Nigerian players that were in action for their respective clubs in the English Premier League on Saturday, November 30th.


Nigerian players with dual nationalities and have played competitively for the senior national teams of other countries have been omitted.
At Anfield, Super Eagles defender Leon Balogun was not in the Brighton traveling squad that were beaten 2-1 by title-chasing Liverpool.

A pair of headed goals from Virgil Van Dijk put the Reds in the driving seat before Lewis Dunk pulled one back for the Seagulls.

Elsewhere at the Tottenham Hotspur Stadium, Tottenham ran out 3-2 winners over Bournemouth.

Dele Alli (2) and Moussa Sissoko scored for the LilyWhites before Harry Wilson's late double threatened a comeback for the visitors.

While Dominic Solanke started and went the distance for the Cherries, his teammate Jordon Ibe was missing from the visitors match day squad. Phillip Billing was not available for selection on account of suspension.

And in the late kickoff at the St Mary's stadium, the duo of Isaac Success and Tom Dele-Bashiru are not among Watford's traveling team to face Southampton.