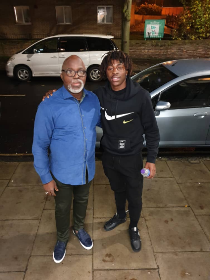 Former Super Eagles invitee Eberechi Eze continued his fine form by scoring for Queens Park Rangers as they were held to a 1-1 draw by Derby County in a Championship match at Pride Park Stadium on Saturday evening.
Manager Mark Warburton handed starts to three Nigeria-eligible players - Eze, central midfielder Luke Amos and winger Bright Osayi-Samuel.
Against the run of play, Waghorn whipped a free kick into the back of the net to give the home team the lead on 23 minutes but the London team equalised through Eze in first-half stoppage time.
The lively Osayi-Samuel was brought down in the box and from the resultant penalty Eze sent the goalkeeper the wrong way.
The talented Queens Park Rangers number 10 has now been directly involved in 11 goals (7 goals, 4 assists) in 19 appearances so far this season.
Nigerian Federation supremo Amaju Pinnick recently held talks with the attacking midfielder over committing his international future to the Super Eagles and the player requested for the chance to continue to focus on his club career and further progress will be made in due course.
It is known that some Premier League clubs are keeping tabs on Eze following his brilliant start to the season.
Ifeanyi Emmanuel