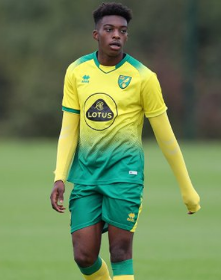 Norwich City's Nigerian striker Tyrese Omotoye simply can't stop scoring at the moment and the latest of his exploits is a brace in the 5-3 win over Reading on Saturday afternoon.

Norwich's youth manager Paul Williams handed the starlet his 10th U-18 Premier League start for the Canaries this season at the Bearwood Park Training Facility, and he duly reciprocated with a scintillating showing.

Omotoye extended his team's lead from the spot after 38 minutes, stepping up to convert the penalty after his teammate Jon Rowe was upended in the area.

He will then make the scoreline 4-2 for the visitors when he found space and time to beat goalkeeper Coniah Boyce-Clarke for his brace in the second half.

The goals thus, took his tally to eight in his last five games for the club.


It is very likely Omotoye will earn his debut for the club's U-23s this season, on the back of such impressive showings.
Born in Belgium, he qualifies to play for Nigeria through his parents and will not reject an invitation to the Flying Eagles if contacted by the Nigeria Football Federation.
Emmanuel Chinaza
Photo Credit : canaries.co.uk