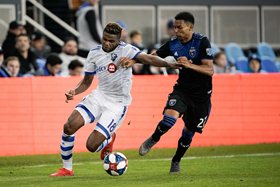 Sporting Director of Major League Soccer outfit Montreal Impact, Olivier Renard has provided an update on the future of Nigeria U23 international Orji Okonkwo.
The 2015 U17 World Cup-winning winger has returned to parent club Bologna following the expiration of his season-long loan deal with the Canadian club.
Montreal Impact announced the hiring of Thierry Henry as their new head coach last month and Renard has suggested that Okonkwo will play under the Arsenal legend when the 2020 season begins.
The 21-year-old had a very successful loan spell at Montreal Impact in 2019, winning the club's Most Valuable Player award and his goal against Portland on June 26 was nominated for the MLS Goal of the Year.
Speaking to MLSsoccer.com, Renard said : ''The plan is for Okonkwo to be back in Montreal for the 2020 season''.
Okonkwo tallied 8 goals in 28 MLS appearances last term, the highest total for a player in his first year with the club since Didier Drogba scored 11 in 2015.
He provided two assists in those games, logging 1,784 minutes.
Igho Kingsley
Photo Credit : impactmontreal.com