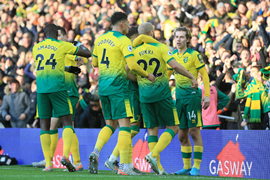 The ongoing Premier League match between Norwich City and Arsenal entered the half-time break with the Canaries leading the visitors 2-1 at Carrow Road.
Teemu Pukki gave Norwich City the lead on 21 minutes but  Pierre-Emerick Aubameyang with a twice-taken penalty equalised for the Gunners in the 29th minute, before Todd Cantwell, with the most significant moment of the afternoon, made it 2-1 in first-half stoppage time.
Speaking during commentary for BT Sport, former Norwich City striker and 1994 Africa Cup of Nations winner, Efan Ekoku revealed the players to blame for the first goal conceded by Arsenal.
He said : ''If you haven't got that real penetration in and around the opposing penalty box, then you are going to be in trouble.

''It's two against one for Pukki, turns smartly, where is the challenge on him, nobody gets to within a yard and a half just outside the box, David Luiz is waiting and waiting for Pukki to pull the trigger. You have to address the situation.


''Mustafi is actually backpedaling, then comes Chambers, a wicked deflection off the arm of I would imagine Mustafi. It may be going to the opposite corner anyway. Poor defending from Arsenal and precise from Pukki''.
Nigerian winger Bukayo Saka was watching proceedings from the bench as at the 70th minute.
Igho Kingsley
Photo Credit : premierleague.com