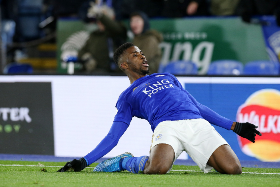 Kelechi Iheanacho got Leicester City up to second on the Premier League table after scoring the game-winning goal in injury time in a 2-1 win against Everton at the King Power Stadium on Sunday evening.
In January 2018, the Nigeria international became the first player in English football to be awarded a goal via a Video Assistant Referee (VAR) decision in an FA Cup match between Leicester and Fleetwood Town.
Today, Iheanacho scored a similar goal and had to wait until it was awarded by VAR and the striker has stressed that he was not under pressure because he was onside when the ball was played by Ricardo Pereira.
An assist was credited to the Nigerian after Jamie Vardy hammered in the equaliser on 68 minutes, with Wilfred Ndidi involved in the build-up to the goal.
Speaking to Sky Sports post-match, Iheanacho said : ''You can call me Mr VAR if you want, I knew it was a goal, I was onside so I knew it wasn't offside, I knew the decision will come so I had to wait for it. We are happy the VAR counted''.
Prior to today's game against the Toffees, Iheanacho had not scored in the Premier League since September 22, 2018.
Ifeanyi Emmanuel
Photo Credit : lcfc.com