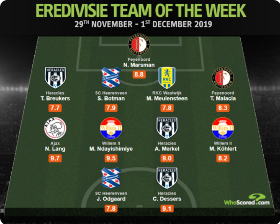 Nigerian star Cyriel Dessers has been included in the latest Eredivisie Team of the Week by football statistics website Whoscored.com.
After the Belgian-born goal machine bagged a brace for Heracles Almelo in their 4-0 demolition of ADO Den Haag on Saturday, November 30, he has now contributed to an impressive 86 goals (61 goals, 25 assists) in 112 matches since the beginning of the 2016-2017 season.
Dessers had a hand in 42 goals during the 2016-2017 season while on the books of NAC Breda, was involved in 26 goals in his two seasons at FC Utrecht and has scored 13 times this season while producing 5 assists.
Against ADO Den Haag, the 24-year-old played three shots with two on target, made two key passes, touched the ball 37 times, completed one dribble and had a passing accuracy of 72.7 percent.
He was awarded a rating of 9.1 out of 10 and only two players Ajax's Noa lang (9.7) and Willem II's Mike Trésor Ndayishimiye (9.5) had a higher rating than the Heracles Almelo number 9 in the Team of the Week.
Before moving to the Netherlands in 2016, he played for Oud-Heverlee Leuven and KSC Lokeren in Belgium.
Ifeanyi Emmanuel