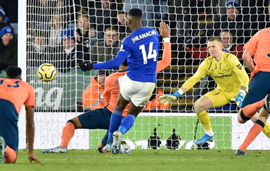 Leicester City and Nigeria forward Kelechi Iheanacho has dedicated his match winning goal on Sunday against Everton in the English Premier League to his family, teammates and fans.

Iheanacho replaced Ayoze Perez in the second half of the game and assisted Jamie Vardy's 13th EPL goal of the season before scoring a 90th minute goal which was awarded after Video Assistant Referee (VAR) confirmed that the Super Eagles star was not in an offside position.

Iheanacho who has not made a Premier League appearance before Sunday evening took to Twitter to show his appreciation to those that are dearest to his heart.

"This one is for the fans the staff my team mates and my family thank you for been there for me ❤️❤️❤️," the MVP at the FIFA U-17 World Cup in 2013 wrote on his verified Twitter handle on Monday morning.

Iheanacho's performance may secure him more playing times for the Foxes who will face bottom of the table side Watford on Wednesday in one of the midweek games in the English topflight.

Leicester are second in the table with 32 points, eight points adrift of leaders Liverpool having won their last six consecutive league matches.