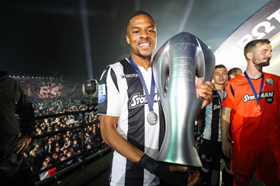 More emerging reports from the foreign media revealed that more scouts from top European clubs were at the Stadio Georgios Karaiskáki yesterday during the Greek Super League game between Olympiakos and PAOK.
Thema Sports Greece uncovered that two glamorous Premier League clubs in the shape of Manchester United and Manchester City were in Piraeus on Sunday and watched former Arsenal starlet Chuba Akpom in action.

The former Super Eagles invitee hopped off the bench in the 66th minute to replace Karol Swiderski for PAOK in a game which ended 1-1.

A minute after he entered the fray, Akpom won a free-kick off Olympiakos's Guilherme before he teed up Maurício who saw his shot which was bound for goal blocked in the 74th minute.

Turkish Super League sides Besiktas and Fenerbahce were also in attendance for the game while German, Italian and French topflight clubs namely Dortmund, Rennes and Torino all deployed scouts to watch the Greek Derby.


While Akpom was taking in his tenth appearance of the season, Super Eagle Anderson Esiti could not audition for the scouts in attendance.
Emmanuel Chinaza
Photo Credit : paokfc.gr