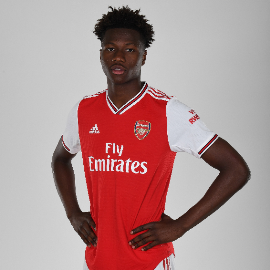 Nigerian defender Daniel Oyegoke is in the running for Arsenal Goal of the Month for November 2019, the Gunners have informed through their official website arsenal.com.
The 16-year-old has been nominated for the award along with nine other Arsenal players.
They are Pierre-Emerick Aubameyang (2), Shkodran Mustafi, Trae Coyle, Emile Smith Rowe, Tyreece John-Jules (2), Kim Little and Vivianne Miedema.
Oyegoke made the 10-goal shortlist thanks to his beautiful header in a 2-2 draw with Fulham in the U18 Premier League on November 9.
It was his first goal for Arsenal U18s after seven games in which he started six, and the following weekend he struck in a 2-1 loss to Chelsea in the U18 Premier League Cup.
As at the time of this report, Oyegoke had claimed only one percent of the vote, he's far behind Little (48%), Miedema (19%) and Aubameyang (11%) , who are first, second and third respectively in the classification.
A first year scholar, Oyegoke is presently with the Arsenal squad in Indonesia for the U20 International Cup Bali 2019.
Igho Kingsley