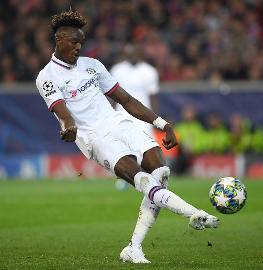 England striker of Nigerian heritage Tammy Abraham is currently recuperating from a hip injury setback albeit could be back in action this midweek when they face Aston Villa.

Like the New York Jets Betting Odds which provides punters with amazing offers that are in their favours, Abraham is poised to return in anger and likely to score more league goals for Chelsea in front of Aston Villa supporters that chanted his name this time last year.

Chelsea head coach Frank Lampard is positive that the two cap England international who turned down the chance of playing for the Super Eagles will be fit sooner than later after the injury against Valencia in the UEFA Champions League last week.

As reported by the official website of Chelsea,  the former Blues midfielder updated the media saying:

''Tammy is okay. We are going to give him every possible chance to be fit. There is still some pain in the area of the injury, we will make a judgement call tomorrow.''
But beyond the fitness news and irrespective of whether Abraham plays this Wednesday or by the weekend,  there could be another positive news for the Chelsea fans as the outcome of their transfer ban appeal will be made known in few days.

The Court of Arbitration is set to rule on the possibility of Chelsea able to sign players again after falling short of FIFA rules as regard player acquisition.

Abraham was thought to be heading out for a loan spell at the end of last season from his loan at Aston Villa but a transfer ban on the club meant that he along with other youngsters at the club did not head out for brief stints.

The confidence in Abraham  by Lampard this season has duly been rewarded with 10 Premier League goals only level with Pierre Emerick Aubameyamg of Arsenal and three goals shot of Leicester City's Jamie Vardy.

And talking about watching the Anglo Nigerian remain at Chelsea and continue to strut his talent in England, a new television deal will come in place and like your inclusive, premium quality betting company named above where fans can bet the outcomes of Chelsea games a £80m TV deal to boost Premier League teams will come on board this week as Amazon TV are set to show ten league games via streaming services.

The television company are set to broadcast 20 league games till the 2021/2022 season thereby becoming the first to do on television to carry out a similar media duties.