...the complete Nigerian football portal
Subscribe
Does Victor Moses Have A Future At Chelsea?
Published: December 06, 2019 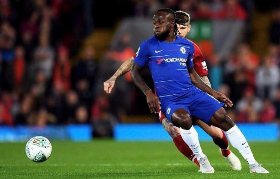 Victor Moses has made the headlines since transferring to Fenerbahce from Chelsea last summer, but for all the wrong reasons as he seem not to get any more decent games under his belt.
The former Super Eagles winger has had quite a career crash-landing stint in Turkey under few months, and it is worth evaluating what could have been had he taken up other options he had earlier, but Fenerbahce.

Or perhaps, the problems were down to the player himself — Moses actually hit the ground running at the Şükrü Saracoğlu Stadium, scoring and providing an assist in their league opener against Gaziantep FK.

But since returning from a hamstring affliction which struck him down and kept him out for two months, the Yellow Canaries No. 11 has yet to contribute in front of goal for the club, and it has been suggested that manager Ersun Yanal is becoming fed up and is prepared to cut short his stay there.

He is however, back on the sidelines after picking up yet another muscle injury in midweek and could be ruled out till next year.

But do talks of an imminent return  to Stamford Bridge hold water in respect to serving as a springboard to resurrecting the 28-year-old's career? This is very unlikely.

Antonio Conte might have overseen a masterstroke managerial shakeup with Moses during their title-winning campaign but there are little chances Frank Lampard will find a place for the Nigerian in his current setup.

Moreover, he will find game time limited with stiff competition for the flank spots at the moment, as all of Pedro,Willian, Callum Hudson-Odoi and Christian Pulisic will be above him in the pecking order.

The best option for the 2013 AFCON winner could be a return to a modest side in the English Premier League where he will put himself back into reckoning by reinventing himself and working towards been more productive in the final third.