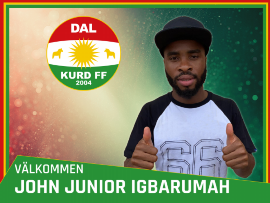 Swedish Superettan club Dalkurd FF have announced the signing of Nigerian striker John Junior Igbarumah.
The 27-year-old has joined Dalkurd FF from Allsvenskan outfit IK Sirius, for whom he scored one goal and provided an assist in 11 appearances over the course of the 2019 season.
Igbarumah, who is is a product of Dynamo Football Academy in Nigeria which produced Kennedy Igboananike and Moses Ogbu, has inked a two-year deal with Dalkurd FF.
Commenting on his transfer, he told the , official website of Dalkurd : ''It feels good to come to a club like Dalkurd that has a lot of energy and hunger.

''Dalkurd is a club that has outdone itself over and over again over the years. It is an honor to come to Dalkurd, which has progressed in a very short time.
''I look forward to the coming season. I want to get to know the fans and everyone around the club and become part of the Dalkurd family. I look forward to a happy season in Dalkurd''.
Described as a quick and technical striker with a good shot, Igbarumah has also worn the colours of Carlstad United and Sandvikens IF in Sweden.
Igho Kingsley
Photo Credit : dalkurd.se