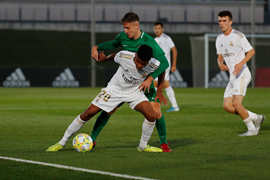 Nigerian winger cum attacking midfielder Marvin Akinlabi scored his second league goal of the season for Real Madrid Castilla as they earned a 2-2 draw against Internacional de Madrid at the Alfredo Di Stéfano Stadium on Saturday, allnigeriasoccer.com reports.
Rufo opened the scoring for the visitors in the third minute, only for álvaro Fidalgo to restore parity when he converted a penalty kick just past the half-hour mark.
Wearing the number 20 jersey, Akinlabi bundled the ball home from close range, after the Internacional de Madrid defenders failed to clear a corner kick in first-half injury time.
The dismissal of Real Madrid's De la Fuente in the 57th minute made things difficult for Raul's side and four minutes from time their one-goal lead evaporated as Rufo netted his second of the game to even the match.
Akinlabi's other goal for Real Madrid Castilla came against Racing Ferrol on October 26.
The 19-year-old, who was promoted to the reserve team before the start of the 2019-2020 season, has made 7 starts in the Segunda División B - Group I and played eight games as a substitute.
Real Madrid Castilla occupy the 14th position in the table with 19 points ahead of their next league match against Getafe on Sunday, December 15.
Ifeanyi Emmanuel
Photo Credit : realmadrid.com