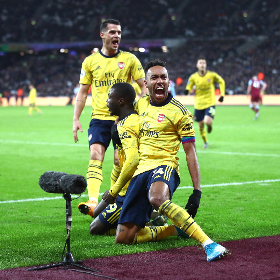 In a proverbial game of two halves, Arsenal finally ended their winless streak after coming from behind to beat West Ham United 3-1 in a London derby at the London Stadium on Monday night.
England U19 international of Nigerian descent, Bukayo Saka was a non-playing substitute while midfielder James Olayinka was not in the 18 despite training with the first team in recent days.
A goal from Italy international Angelo Ogbonna on 38 minutes separated the two sides at the break, awarded after referee Mike Dean consulted the video assistant referee.
Gabriel Martinelli marked his full Premier League debut with a goal on the hour mark and it was Arsenal's first shot on target.
Freddie Ljungberg's side turned it around with a stunning goal from record signing Nicolas Pepe, his first goal from open play since joining the club, which turned the complexion of the game.
Pierre-Emerick Aubameyang added a third in the 69th minute to secure the three points for the North London club.
Bukayo Saka has played only 12 minutes since Spaniard Unai Emery was sacked as coach of the Gunners and that was against Norwich City eight days ago.
Ifeanyi Emmanuel
Photo Credit : arsenal.com