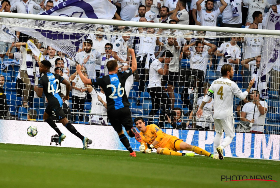 Real Madrid will make a trip to Jan Breydel Stadium on Wednesday for their last UEFA Champions League group stage game, with little riding on their own eventual outcome from the clash with their hosts, Club Brugge — of course they are all but assured of finishing second tomorrow's result notwithstanding.
But the Blue-Black club harbour aspirations of their own, and this game could come in handy.

Philippe Clement's charges are still within a shouting chance of qualifying for the secondary European competition that is the Europa league as they sit in third on the group table, a point above basement side Galatasaray.

Clement has since lauded his side's doggedness and mentality in their 1-1 draw last time out versus Gala in the competition, a game which featured a late, late goal from his team to keep them firmly in their quest to continue to play European football next year.

They will however, come even under severe test to achieve their ambitions with the visit of Los Blancos, and the onus could fall on their Nigerian duo of Emmanuel Bonaventure and David Okereke to help see them through.

The former has already proved the scourge of Zinedine Zidane's team, scoring twice in a 2-2 draw with the opposition at the Spanish capital in October, and yet again he is sure to come under the limelight here.

Both have showed flashes of their brilliance in diverse measures for the club this season, and have a combined total of 15 goals for the season, but will be required to produce better.

But it is worrying that they are currently embroiled in some sort of goal drought — Okereke has yet to find the net in his last seven matches across all competitions since scoring in a league game versus Kortrijk, while his compatriot has fired blanks in eight games, last scoring against Gent on October 6, so this game offers an illustrious opportunity for these two to grab a chance and end their dip.

It even helps that a goal or two could prove decisive with the state of things in the group now, and will be important for any of them to end the year on a high.