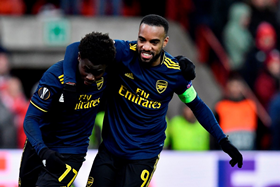 Arsenal interim head coach Freddie Ljungberg has admitted that the star performer in his side's 2-2 draw with Standard Liege, Bukayo Saka was upset with him before the game.
The Swede set up his team in a 3-4-3 formation with Saka deployed as a left wing-back, a role he has played for England youth teams in the past but the first time he was asked to do so at club level.
The Gunners number 77 was saddled with defensive and offensive duties and he impressed, creating the first goal for Alexandre Lacazette before scoring the equaliser nine minutes from time.
''He was amazing. He was a bit upset with me before the game that he had to play wing-back and full-back. He’s a tremendous talent,'' Ljungberg told reporters post-match.

''His final ball and last bit is always effective.''
With an eye on the upcoming Premier League meeting with Manchester City and the squad ravaged by injuries to several first-teamers, Ljungberg opted to name six teenagers in his matchday squad - Saka, James Olayinka, Gabriel Martinelli, Tyreece John-Jules, Zech Medley and Emile Smith-Rowe.
''I feel sorry for our young players. A lot of them haven’t been on loan, they’ve not had that exposure to men’s football.

''Some of them made mistakes but they’ll learn from those mistakes and won’t do them again.

''Bukayo had a tremendous night,'' he added.
Playing as a wing-back, Saka registered a game-high five shots, made a game-high four key passes, made two tackles and one interception, according to OPTA stats.
Ifeanyi Emmanuel
Photo Credit : uefa.com