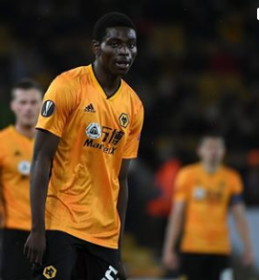 American-born Nigerian midfielder Owen Otasowie has made his professional debut for English Premier League club Wolverhampton Wanderers, allnigeriasoccer.com reports.
Aged 18 years and 236 days, Wolves manager Nuno Espírito Santo handed the box-to-box midfielder his debut in the 73rd minute of Thursday evening's 4-0 rout of Besiktas in the Europa League.
Otasowie is the second youngest player of Nigerian descent to feature in the group stage of the Europa League this season after Arsenal's Bukayo Saka who was aged 18 years and 14 days when he started against Eintracht Frankfurt on September 19.
He was rewarded with a senior debut after his brilliant form for Wolverhampton Wanderers U23 team.
Prior to his maiden appearance for Wolves, he was an unused substitute against Sporting Braga (Nov 28) in the Europa League and Sheffield United in the Premier League (Dec 1).
Few minutes after his introduction against Besiktas, Otasowie almost scored but his header hit the woodwork.
The highly-rated youngster is also eligible to turn out for England and has played non-binding games for United States U18 team.
Ifeanyi Emmanuel
Photo Credit : wolves.co.uk