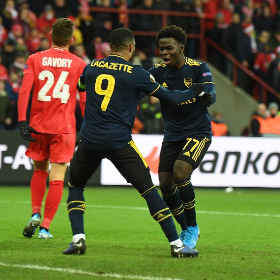 Arsenal forward Bukayo Saka produced a master class performance Thursday night as Arsenal came from two goals down to draw 2-2 against Standard Liege to top Group F of the UEFA Champions League and finished as group leaders with 11 points.

Saka played a different role in Belgium as he was deployed as left wing back, assisting Alexandre Lacazette's goal before adding a gloss with the second of the night for the Gunners.

The media rated the England youth international of Nigerian descent a near perfect score rating in the rather unconvincing general display by the north London side.

It was a 8 out of 10 for Football.London which covers all London based football clubs in the English Premier League.

"Bukayo Saka: For a first senior game in a new position this was impressive indeed from Saka, even if his greatest strength was heading forward. Two powerful efforts in the first half might well have resulted in goals.

''He got his reward eventually when Alexandre Lacazette flicked in his cross in the 78th minute and he curled in an exceptional equaliser. 8."


ESPN.com also gave the London-born Nigerian same score as Football London.
"MF Bukayo Saka, 8 -- Arsenal's star man on the night, though he must be more clinical in front of goal -- particularly when presented as many clear-cut chances as he had this evening. In the positive column, his runs were well-timed and executed professionally, and he was ultimately rewarded with a goal and an assist."

Daily Cannon, a web blog dedicated to the club went with the thoughts of the two websites with the same 8/10.

"Bukayo Saka 8 – Had a number of good chances in both halves, but ended up scoring from one of the more difficult ones. Before that, he put in an inch-perfect cross for Lacazette to head home. Despite playing out of position at wing-back, Saka was a big threat, and he inspired the comeback almost single-handedly," the blog wrote.