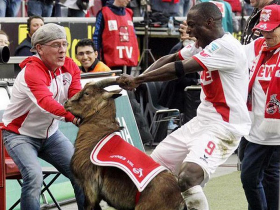 Anthony Ujah has explained the story behind his infamous goal celebration during Cologne's 4-2 win over Eintracht Frankfurt in a German Bundesliga clash at the RheinEnergieStadion on March 8 , 2015.
The Nigeria international, who scored Cologne's fourth goal eight minutes from time, celebrated by running to the touchline and grabbing the Cologne mascot Hennes by the horns for a few seconds.
Animal rights activists and Cologne fans were furious over Ujah's inappropriate goal celebration and he had to tender an apology after the game.
Speaking to SuperSport Naija Made on Saturday via Skype, Ujah explained : ''Billy the goat? It is still haunting me until now, it is still following me.
''There is nowhere I go..., in Union Berlin here everybody wants to know what happened - even the coach, the President - it is something I cannot run away from and even in the next 30 years I know that thing will keep on following me everywhere because that thing really went viral.''
Asked why he celebrated his goal in that way, the former Lillestrom star answered : ''It was spontaneous, as a striker sometimes when you score an unbelievable goal or unexpected goal, you celebrate in a way that you don't really plan, you don't really expect.
''I scored quite late in the game, I did everything I could to score in that game, I was hitting the crossbar, the goalkeeper was really good but we were winning 2-1 and then I scored.
''That feeling, I was just running and then I ended up close to Billy.''
Ujah did not last long at Cologne after his controversial goal celebration as he agreed a transfer to Bundesliga rivals Werder Bremen less than two months after the incident.
Ifeanyi Emmanuel
Photo Credit : dw.com