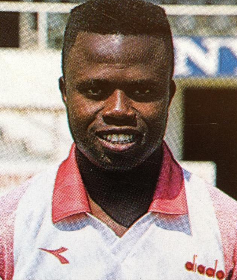 Former Real Madrid striker and Super Eagles legend Mutiu Adepoju is shattered over the death of his former teammate, Philip Osondu, who passed away in Belgium on Thursday, December 12 at the age of 48, allnigeriasoccer.com reports.
Adepoju and Osondu were on the same Flying Eagles team that reached the final of the 1989 FIFA World Youth Championship, with the striker starting all the group matches against Saudi Arabia, Portugal and Czechoslovakia while he came off  the bench against United States and Portugal in the semifinal and final respectively.
Osondu's claim to fame was winning the Golden Ball award at the 1987 FIFA U16 World Championship and he earned a celebrated move to RSC Anderlecht a year after the tournament in Canada.
He was at Anderlecht for eight years and was farmed out on loan to RWD Molenbeek and La Louvière during his time with the Purple & White, before a permanent switch to Union Saint Gillis in 1996.
In a statement via Twitter, La Liga Ambassador Adepoju said : ''Philip Osondu was my teammate at Saudi 89 FIFA U20 World Cup, where we helped Nigeria finish in second position.
''So shattered about the news of his passing. Dear Lord, do grant him eternal rest and console his family''.
Osondu also played for El Kanemi and Diegem Sport before hanging up his boots.
Ifeanyi Emmanuel