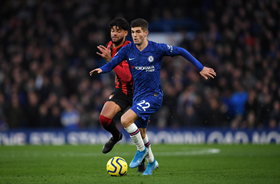 A round-up of Nigerian players that were in action for their respective clubs in the English Premier League on Saturday, December 14th.
Nigerian players with dual nationalities and have played competitively for the senior national teams of other countries have been omitted.
In the early kickoff, Liverpool beat Watford 2-0 in their at Anfield, courtesy of a brace from Mohamed Salah.

There was no place for Tom Dele-Bashiru in the Hornets squad that traveled to Merseyside while his teammate, Isaac Success was a non-playing substitute.

The impressive Philip Billing started and went the distance for the visitors while his compatriot Dominic Solanke was introduced for Joshua King after 75 minutes. Jordan Ibe was missing from the match day squad.

Elsewhere, Leicester City and Norwich City played out a 1-1 draw at the King Power Stadium.

Teemu Pukki opened the scoring but an own goal from Tim Krul restored parity for the Foxes.


Wilfred Ndidi and Kelechi Iheanacho made starts for the hosts, with the latter making way for Demarai Gray after just 39 minutes following a tactical move from Brendan Rodgers.
Today's match was Iheanacho's 100th appearance in the English Premier League since debuting against Watford in August 2015.
Emmanuel Chinaza