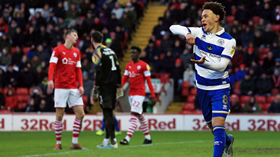 Tottenham Hotspur loanee Luke Amos bagged a brace but ended up on the losing side as Queens Park Rangers were beaten 5-3 by bottom team in the Championship, Barnsley on Saturday evening.
Apart from Amos, two other players of Nigerian descent in the form of Eberechi Eze and Bright Osayi-Samuel started for the Hoops at Oakwell Stadium.
And it was the central midfielder who made the biggest impact for his side, scoring either side of half-time, his first goals for the club he joined on loan in the summer transfer window.
On 12 minutes, Conor Chaplin's opener was cancelled out by Amos as he fired home a rebound after Jordan Hugill's effort came back off the post.
With Rangers trailing 3-1, Amos reduced the deficit to 3-2, lashing home after goalkeeper Samuel Radlinger parried a shot into his path at minute 54.
Barnsley's other scorers were Conor Chaplin (2), Cauley Woodrow and Bambo Diaby, while QPR's Ilias Chair got on the scoresheet in the 90th minute.
The 22-year-old Amos made his competitive debut for Tottenham Hotspur on the opening day of the 2018-2019 season against Newcastle United and previously spent time on loan at Stevenage and Southend United.
Igho Kingsley
Photo Credit : qpr.co.uk