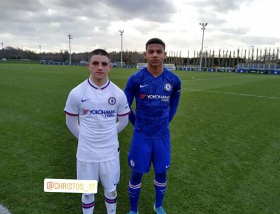 Chelsea face competition from several clubs in Europe, including Italian Serie A side SPAL, in the race to sign promising Nigeria-eligible center forward Bryan Fiabema.

The Blues have been keeping tabs on the 2003-born Tromso player and started observing him at close quarters at Cobham on Monday, December 9, with a view to offering him a place in the Academy.

''Bryan will stay there until December 20 and he came over on December 9. Chelsea have been monitoring him for some time, I have been speaking to them for a while, '' Fiabema's agent, Imad El Hammichi told allnigeriasoccer.com.

''There are many clubs interested in him. In the summer, SPAL from Italy made a concrete offer to his club''.

Described as a pacy and physical forward, Fiabema has been likened to two Premier League stars in the shape of Bournemouth's Norway star Joshua King and Chelsea striker of Nigerian descent Tammy Abraham.

''He is tall, strong, quick and knows where the goal is. He reminds me of Joshua King and maybe Tammy Abraham,'' El Hammichi added.

Fiabema is eligible to represent Nigeria through his father but Norway are ahead of their African counterparts in the race for his services, having earned caps for the Scandinavian country at U15, U16 and U17 levels.

''It's up to him to make a choice later for which national team he will play in. Right now he plays for the Norwegian U17s. And he is happy with that,'' El Hammichi concluded.


Fiabema inked his first professional contract with Tromso before the start of the 2018 season.
Ifeanyi Emmanuel