...the complete Nigerian football portal
Subscribe
'He Has Been Very Selfish Since Scoring Vs Real Madrid' - Belgian Pundit Hits Out At Club Brugge's Dennis
Published: December 17, 2019 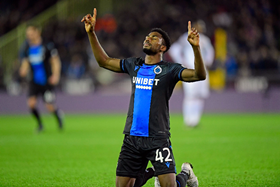 Emmanuel Dennis has been criticised for being selfish by Belgian pundit Mo Messoudi in the wake of Club Brugge's 3-0 rout of KV Mechelen in which he scored a goal of the season contender.
On a personal level, the highlight of Dennis's season so far was netting a brace against Real Madrid in the Champions League two months ago, and Messoudi noted that the Nigeria national-teamer has not been a team player since that game at the Estadio Santiago Bernabéu (Madrid).
The statistics appear to back up the claims made by Messoudi as the Club Brugge number 42 has managed only one assist in 11 appearances across all competitions since they drew with Real Madrid.
"He's a player who is intuitive. Since his goals in Madrid he has been playing very selfishly, I think.In the early stages (against KV Mechelen, ed.) that was actually the case all the time,'' Messoudi said on Extra Time via voetbalprimeur.be.
''There was a lot of irritation in the stands because he is too selfish, like the past games. Although he makes everything right with Tau's 1-0, because he sees Vormer standing there free".
Since joining Club Brugge from Ukrainian outfit Zorya Luhansk in July 2017, Dennis has set up 10 goals in 93 matches.
Igho Kingsley
Photo Credit : clubbrugge.be