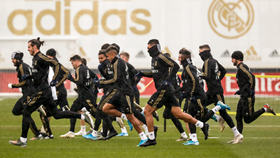 Former Real Madrid midfielder Mutiu Adepoju, who is a La Liga Ambassador these days, has revealed that Wednesday's meeting between Barcelona and Los Blancos at the Camp Nou is one of the most eagerly anticipated games in the world.
The 1994 Africa Cup of Nations-winning midfielder noted that there is a lot of rivalry between Barcelona and Real Madrid, two of the most successful clubs in the history of La Liga.
"El Clasico is the most watched football game in the world and the rivalry between Real Madrid and Barcelona started long, long time ago,'' Adepoju told allnigeriasoccer.com on Wednesday morning.
"They are the most successful teams in the world and I believe any game between the two teams is always very, very interesting, tough and a game of rivalry.
"It's a game that anyone that wins has a lot to gain, and it is not going to be less today."
Real Madrid coach Zinedine Zidane has unveiled a list of 19 players for the trip to Barcelona and the Frenchman will not be able to count on the services of Eden Hazard and Marcelo after they both failed to recover from injuries.
Adepoju has urged the Real Madrid players to stand up and be counted in the absence of the two key players.
"These are important players in the team, most especially Hazard, it could have been his first El Clasico game and he would have loved to play it but there are still more games ahead.

''Marcelo is a good player. Definitely they are going to be missed but that should not be an excuse because they equally have players that are going to stand up for them.''
You have to go back to the 1998-1999 season to find the last time a Nigerian player last featured in El Clasico and that was former Barcelona right-back Gbenga Okunowo, who played the last 31 minutes of a 2-2 draw at the Santiago Bernabéu on September 19, 1998.
Ifeanyi Emmanuel
Photo Credit : realmadrid.com