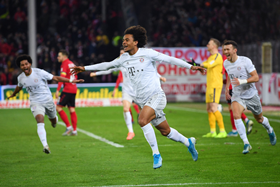 Dutch-born striker of Nigerian parentage Joshua Zirkzee scored on his Bundesliga debut for Bayern Munich as the champions recorded a 3-1 win against Freiburg in a matchday 16 fixture at the Schwarzwald-Stadion on Wednesday night, allnigeriasoccer.com reports.
The 18-year-old came off the bench in the 90th minute with the scoreboard reading 1-1, replacing Barcelona loanee Philippe Coutinho and he had a big say in the outcome of the game.
Two minutes into his debut, he slipped the ball though goalkeeper's Flekken legs after receiving a pass from Serge Gnabry to make it 2-1.
Lewandowski's 16th minute opener was cancelled out by Grifo on 58 minutes, before Zirkzee's game-winner in injury time, then Gnabry made sure the points were safe when he scored Bayern's third goal.
Aged 18 years and 210 days today, Zirkzee is the youngest ever Nigeria-eligible player to score in the German Bundesliga.
A Netherlands U19 international, the prolific center forward made his first team debut for Bayern Munich against Tottenham Hotspur in the Champions League exactly a week ago.
Ifeanyi Emmanuel
Photo Credit : fcbayern.com