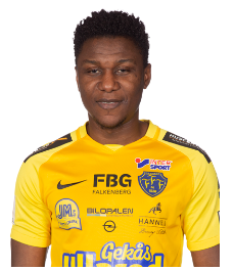 Swedish Allsvenskan side Falkenberg have informed via their official website that Nigerian midfielder Dominic Chatto has ended his playing career at the age of 34.
A product of Pepsi Football Academy, Chatto joined Falkenberg in 2017 and could only play one game for the club in 2019 due to a knee injury, lasting 14 minutes on the pitch against Helsingborg on August 3.
"Unfortunately, the last few years have been riddled with injuries but with his leadership qualities he has still meant a lot especially to the younger players in the dressing room and out on the field.
"Falkenbergs FF wishes Dominic Chatto good luck in the future," Falkenbergs said in a statement.
He is best remembered in Sweden for his time at BK Hacken, where he formed a good partnership in midfield with another Nigerian player John Chibuike.
Apart from the aforementioned clubs, he represented Inter Turku (Finland), Bodø/Glimt (Norway) and Ordabasy (Kazahstan).
His Nigerian clubs include Highlanders Football Academy, Heartland FC, FC Sheraton and AS Racines.
Igho Kingsley
Photo Credit :  falkenbergsff.se