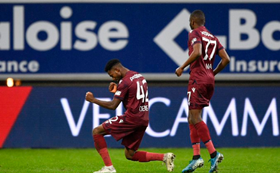 Allnigeriasoccer.com's round-up of the Nigeria-eligible players that were on target for their respective clubs in matches across Europe on Sunday, December 22.
In a Belgian First Division A clash at the GHELAMCO-arena (Gent), Cub Brugge were held to a 1-1 draw by Gent, with Nigeria international Emmanuel Dennis getting on the scoresheet for the second league game in a row.
The Club Brugge number 42 headed past goalkeeper Thomas Kaminski to give his side the lead after 56 minutes but an equaliser in the 73rd minute ensured the home team got a share of the points.
The best individual performance of the weekend was from striker Kingsley Onuegbu, who scored a 34-minute hat-trick to power Nea Salamis Famagusta past Olympiakos Nicosia (3-0).
The 33-year-old broke the deadlock 11 minutes into the second half, doubled the advantage on 76 minutes, before rounding up the scoring in the 90th minute.
Having scored just one goal in his first nine league games in this season's Cypriot First Division, Onuegbu is enjoying a rich vein of form, with 5 goals in his last five matches.
Finally, in-form striker Emmanuel Iyoha took his tally to four goals from seven 2.Bundesliga games after netting a crucial equaliser for Holstein Kiel in a 2-2 draw at Sandhausen.
Trailing 2-1 with 15 minutes left on the clock, the former Germany U20 international scored from close range to ensure the spoils were shared.
Igho Kingsley
Photo Credit : clubbrugge.be