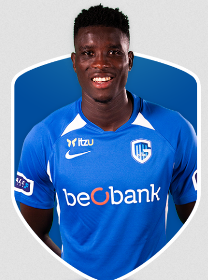 Racing Genk beat AS Eupen 2-1 on Boxing Day in a Belgian First Division A match staged at the Luminus Arena, with Paul Onuachu getting on the scoresheet for the Belgian champions.
Racing Genk took the lead through Junya Ito whose brilliant left-footed finish from inside the area after 12 minutes beat goalkeeper De Wolf.
On the hour mark, Onuachu doubled the advantage as he latched onto a pass from Ito and slotted into an empty net, before Jean Thierry Lazare Amani halved the deficit three minutes later.
The lanky Super Eagles striker made a move to Belgium in the summer, ending a seven-year association with Danish club FC Midtjylland, and has wasted no time settling down.
His goal today was his 16th in all competitions since January 1, 2019 - 8 in the colors of Genk and another 8 for his last club.
The victory against AS Eupen sees Racing Genk end 2019 in eighth place. They have 31 points from 21 matches.
Igho Kingsley
Photo Credit : krcgenk.be