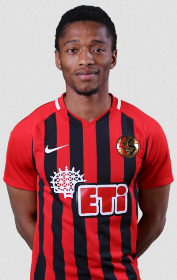 Eskişehirspor Vice President Omer Kurumehmetoglu has issued an update on the situation of Nigerian winger Jesse Sekidika amid reports that he has agreed to join Super Lig champions Galatasaray.

Kurumehmetoglu has insisted that Galatasaray are not the only Turkish side in the race for the signature of the former Brooke House sensation, as offers have also been received from Fenerbahce, Trabzonspor and Gazisehir but nothing has been agreed yet.
Although Sekidika has been offered fresh terms to extend his stay at Eskişehirspor, he wants to move onto pastures new in the January transfer window.
"There's no deal with Jesse. The teams from the Super Lig are interested. Galatasaray, Fenerbahçe, Trabzon and Gazişehir… But there is no clear situation," Radyospor citing Ajansspor.com quoted Kurumehmetoglu as saying.
"His agent will come and sit down. We'll decide. These offers came through the managers. There were bilateral conversations. The result is clear this weekend.

"The player did not give a direct team name. We wanted him to stay on the team. We made him offers. We said stay with us, extend your contract. But the player wants to be transferred. There is nothing to do after the player wants to go."
Former Manchester United trialist Sekidika has been in the form of his life since the start of the 2019-2020 season, scoring 8 goals in 16 appearances in the Turkish second tier.
Ifeanyi Emmanuel
Photo Credit : eskisehirspor.org.tr