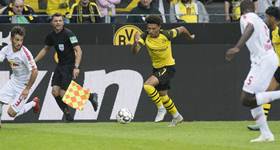 "They were quoted, in my view, an astronomical fee of €120million. That didn’t include the €50million commission to the player’s agent.

"They have now stepped away from that and said ‘that’s not going to happen’."
Last year, Obasi successfully defended himself when he was investigated by the English Football Association over allegations that he was paid 200,000 pounds for Sancho's transfer to Manchester City from Watford in 2014.
Ifeanyi Emmanuel
Photo Credit : bvb. de