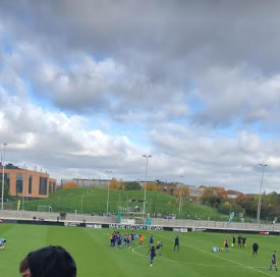 Allnigeriasoccer.com understands that promising Nigerian goalkeeper Kelechi Chibueze is at loggerheads with Chelsea over a new contract ahead of the 2020-2021 season.
The 16-year-old glovesman is among the talented players in the ranks of the Blues Academy offered a scholarship but he is unhappy with the terms.
Unlike some of his teammates who are due to go professional on or after their 17th birthday, including Nigeria U17 invitee Prince Adegoke, Chibueze was only offered a two-year scholarship and this has caused issues.
Chibueze is not a happy boy at the moment and is considering leaving Stamford Bridge.
Although his technical qualities are not in doubt, it is believed that he is lacking the physical attributes needed to succeed in the U18 Premier League and Premier League 2.
The goalkeeper has lost his spot in the England youth team setup as he has not been called up to the U17 team this season.
Chelsea's Premier League foes, Leicester City are among the teams monitoring the situation of Chibueze with a view to a swoop.
Ifeanyi Emmanuel